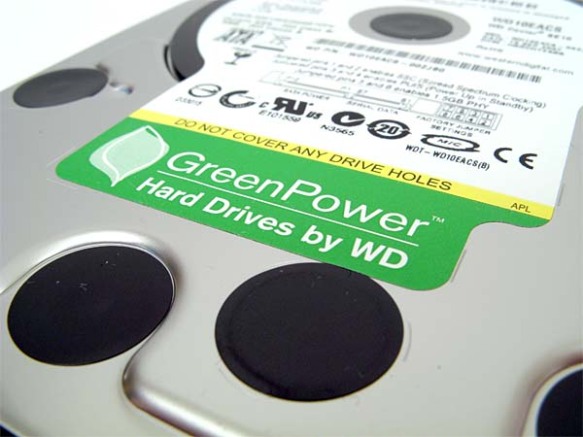 Having replaced all the dodgy Seagate disks in my RAID array with new Western Digital Caviar Green (WD6400AADS) drives in February, I have already stumbled upon a big new problem.

It would appear that these Caviar Green disks achieve some of their stated green-ness by using a ‘clever’ energy saving system which automatically parks the hard disk heads (moving them off the platters) if the disk has been idle for over 8 seconds. This apparently reduces aerodynamic drag while the platters are spinning and achieves some microscopic power savings.

According to the published WD Caviar Green spec sheet, the disks are rated for 300,000 of these head load/unload cycles during the warranted lifetime of the disk. I checked how many load/unload cycles my new disks had performed so far in their short 1,840 hours (76 days) of life and gasped at what I saw – 234,000 !

My disks had consumed 78% of their rated load/unload cycles in just over two months of usage! Why was this happening?

Some quick investigation revealed that this is due in some part to my using the disks in a Linux system and has been exacerbated by including them in a RAID array. I calculated that on average the disk heads have been loading and unloading every 30 seconds since I first started using them. That would mean an expected life span of just over 100 days 😯

I needed a solution – and quick. WD are not oblivious to this issue, but have not exactly been forthcoming in their marketing material to bring this to your attention. They have however published a knowledge base article – In Linux the S.M.A.R.T Attribute 193 Load/Unload counter keeps increasing on a SATA 2 hard drive – which states the following:

WD drives are designed to reduce power consumption, in part by positioning the heads in a park position (unloading the heads) and turning off unnecessary electronics, resulting in substantial power savings. WD defines this mode as Idle 3.

Some utilities, operating systems, and applications, such as some implementations of Linux, for example, are not optimized for low power storage devices and can cause our drives to wake up at a higher rate than normal. This effectively negates the power-saving advantages of low-power drives, such as WD GreenPower™ models, and artificially increases the number of load-unload cycles. Although the increase in load/unload cycles is within design margins (drive has been validated to 1 million load/unload cycles without issue) a balance between life of product, logging requirements, and low power consumption can be achieved depending on what is critical to the system. Present SMART normalized values have not been re-normalized to 1 million cycles so advisory reporting on this attribute does not mean failure of product.

This firmware modifies the behavior of the drive to wait longer before positioning the heads in their park position and turning off unnecessary electronics.

It’s not exactly plain sailing to use this tool, particularly if you are running Linux. I found the simplest route was to copy the utility to the DOSAPPS directory of an Ultimate Boot CD, rebuild the ISO image, boot off it into FreeDOS and run it from there. After executing wdidle3.exe /d I saw the good news that “Idle3 Timer is disabled” on all disks and the Load_Cycle_Count counter has been permanently halted *phew*

I have hopefully saved my disks from an early demise but I fear that the amount of overuse they have suffered already may have caused permanent wear damage. I guess only time will tell.