It’s bewildering what the BBC considers to be front page news. 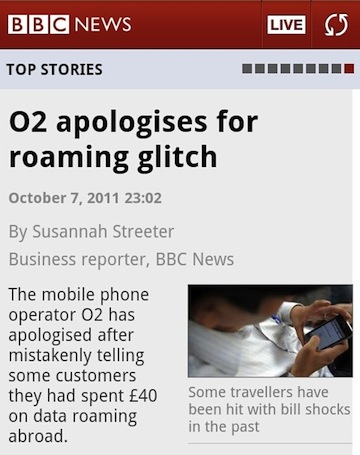 Oh dear! Did international roaming fail leaving O2 customers without data services abroad, or did naughty O2 overcharge their customers? No, neither.

This headline actually relates to an insignificant story of how a very small number of O2’s roaming customers received a text message incorrectly informing them that they had run up large data roaming charges.

Rachel Sinclair, from Bristol, was just hours into her trip to France on the 24 September, when she received a text on her iPhone telling her she had downloaded £20 of data.

“I double checked the roaming function was off and then turned off the handset but the next morning I received another text saying the bill had gone up to £40. I was away with friends and it really took a bit of pleasure out of the holiday.”

After investigating her case, O2 said that she had in fact accrued just 60p in data roaming charges, not £40.

The company estimates that she was one of up to 100 customers who were sent messages in error at the end of last month, warning them they had reached data roaming limits even though they had not downloaded that amount.

So this wasn’t a case of a mobile operator overcharging, just their automatic warning systems being a bit trigger happy.

This text glitch apparently affected “up to 100” of O2’s 22 million mobile customers (0.0005% of O2’s mobile customer base), but still the BBC News editors deemed this story of sufficient international public interest to promote it to their front page.

BBC: Some travellers have been hit with bill shocks in the past

So? Some travellers have been hit by lightning in the past! What has this got to do with anything? It’s sloppy sensationalist journalism, at a time when the National Union of Journalists are complaining about the proposed cuts at the BBC. First for the chop should be Susannah Streeter, the author of this drivel.